I've been trying to find the right word to label how I feel this week about the fundraising effort I made on behalf of @whatsuptucson, the Tucson focused information based Twitter account that I run.

Astonished, amazed, overwhelmed, blown away (ok, that's two words).  There are a few that I came up with.

I've worked on @whatsuptucson for the last five years.  It has grown into a massive time and resource consuming project.  I've paid for most of it's costs myself and donated the hundreds of hours of time it takes to manage it seven days a week throughout the year as it's continued to grow larger and larger.

I had this crazy idea (I thought it was crazy when I thought of it) to do a crowd sourcing style fundraiser to at least cover the data and internet related bills that I have.  I wasn't sure it was going to work or be successful, but I figured it couldn't hurt to try.  The worst that would happen is nothing, and I thought maybe it might have a shot.  Sometimes the world surprises me.

The fabulous woman that manages the digital efforts at my work told me the other day that it is much more difficult to get a large following on Twitter than it is on Facebook.  The way the engagement works is different, and there are almost four times as many active Facebook users than there are Twitter users.  If I use that math, the 26,000 followers that @whatsuptucson currently has would be worth 100,000 or so Likes on a Facebook page.

The fact that over 40 people voted for the work that's done with their hard earned money to help out with @whatsuptucson is nothing short of amazing.  A couple of contributions were $200+ dollars (holy crap!).  This has made me feel like it makes a positive impact for a lot of people and the content that is distributed has demand.

I'm one little man that has done my best to put the work and effort in and hoped for success.  This little fundraiser has made me feel really good.  If you ever wonder if what you do makes a difference to somebody else, I'm living proof that it does.

I have never had a lot of money.  I drive a ten year old car, the newest shirt I own is a year old, I shop at Walmart because it's cheap, fancy dinners are usually at Taco Bell and Burger King, and I haven't taken a vacation since 2010.  I'm not trying to make you feel sorry for me (I do have a full time job in addition to running this Twitter), I just thought I'd share because this little fundraising project has made a gigantic impact and I'm really grateful.  Anthony keeps telling me "You've earned it".  I wouldn't give myself that much credit, I'm more excited that it has meant a lot to the people who follow this Twitter account and that has made all of the work worthwhile.

From the bottom of my goofy little heart, THANK YOU.

It has been suggested to me by a few people that I should continue to keep the page open in case anyone else wants to throw in a few bucks.  There's a point when I'll look greedy or just be flat out annoying, so I'm not going to Tweet about it anymore.  If you choose to add a contribution, I'd like it to be because you feel it's worth it and not because I'm begging for money.  I don't function that way.  Having said that, if you want to see the GoFundMe fundraising page, you can check it out here - http://www.gofundme.com/whatsuptucson

I now return you to the usual silly Kenparazzi photos and stupid stories on this blog. 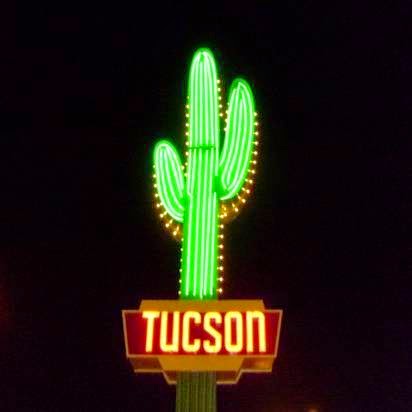