Easter chimichanga and a musical toothbrush

Anthony and I had our weekly Sunday afternoon adventure today.  It is Easter Sunday, so many places were closed but we were still able to get in dinner and grocery shopping.

The first stop we made was at Sauce on Broadway to meet with up with JoeJoe.  An SD memory card had been dropped on the ground at his wedding and I found it.  It had most of his wedding video on it so I felt like a hero being the one who found it and returned it intact.  The card is now in the rightful owner's hands.

The next stop was dinner at Macayo's Mexican restaurant at Broadway and Pantano.  There was a guy sitting a few tables over who looked like Jesus.  A white trash Jesus, but Jesus nonetheless.  You'll see that photo below.  As far as the food, the chimichanga was delicious.

The last stop of the evening was at Walmart Neighborhood Market on 22nd and Craycroft for grocery shopping.  That was uneventful except when we left and a bottle of coffee dropped on the ground out of the cart while walking through the parking lot.  One thing about living in my household:  Dropping something on the ground is an event because the ground is dirty and not everyone appreciates dirty.  But, we got through it and now I'm finishing my laundry and we took Lucky for a walk.

Check out the photos, and Happy Easter!

Ten Commandments plays out of sequence

I was messing around on my iPhone today being lazy in bed and Anthony came into the bedroom quite upset.

"They screwed up the Ten Commandments!"

He had recorded the airing of the Ten Commandments last night on KGUN and when he was watching it today it was apparent to him (I've never seen the whole movie, so I have to rely on his expertise) that the movie played out of sequence about 2 hours and 45 minutes in, skipped part of the movie, and repeated part of it.  The airing of the last hour was a patchwork out of sequence.

Sometimes these things happen.  It could have been due to a number of things... a problem with the feed from the network, a computer glitch that cause the movie or commercial breaks to interrupt the sequence, or some other strange thing.  It's never done on purpose.  There is usually a big scramble to fix it.  I've been at work when this sort of thing occurs and while it upsets viewers, it's the unavoidable rare technical glitch that cannot be anticipated (or it wouldn't happen!).

Anthony is kind of mad because he watches the movie every year on Easter weekend and knows exactly what is supposed to happen during the movie.  He even deleted the movie "Bad Teacher" off of the TiVo to make room for it.  I am impressed actually, I don't retain enough from watching a movie to remember what sequence it should be in even if I've seen it multiple times.

Charlton Heston was very tan in that movie and had perky manboobs.  That part was still intact.

JoeJoe and Diana get married

I had the privilege of attending the wedding of JoeJoe and Diana last night at the Z Mansion in downtown Tucson.

I've known Joe for almost ten years.  He and I worked together at KRQ and I hired him for his first job working in radio.  He now lives and works in Las Vegas and also does a show in the evenings on KRQ here in Tucson with the magic of technology.

I saw a number of people who I had worked with during my time at KRQ (which was from 2001-2005) and even before that in California (my buddy Ryan).  It was fun to catch up and see two awesome people get married.

Easter is on April 31st at Ridgepointe

I walked by the office door at Ridgepointe Apartments last night and had a good laugh.

There was an error on a notice posted on the door.  The office won't be open on Easter Sunday.  Instead of writing 'March 31st', whoever printed out the notice wrote 'April 31st' instead.  Since there is no April 31st on the calendar period, it caught my eye.

If you heard howling in the last couple of days, it's because we've cycled through a full moon.

I was able to get a couple of cool looking photos looking southeast from my apartment patio.  I didn't do any alteration to the photo, it's right out of my camera. 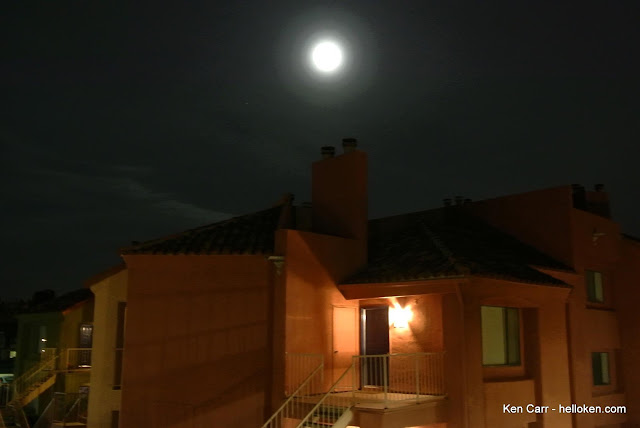 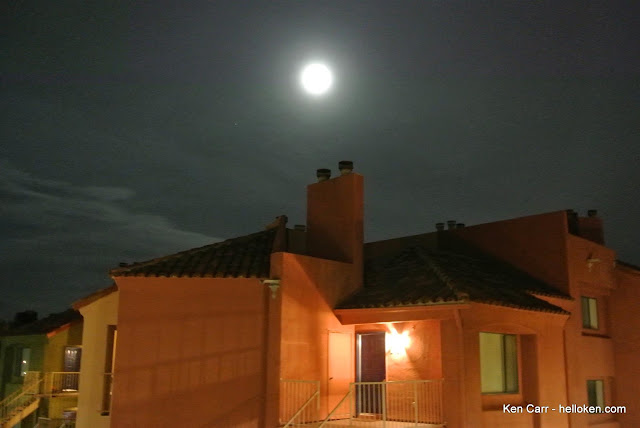 The Honda that was parked next to my car at Ridgepointe last night apparently had it's driver and passenger windows broken.  I don't know if it happened at the apartment complex or somewhere else.  I could only see the damage that had already occurred.

Windows are expensive.  The owner of the car hadn't gotten them replaced with glass, they improvised with something else instead.

The Tucson Fire Department does hose training in the wash southeast of the TV/radio building on a regular basis.

I grabbed my camera to take a picture because it has a cool look to it.

The photos also looked like the firefighter on the top of the ladder was taking a really epic pee. 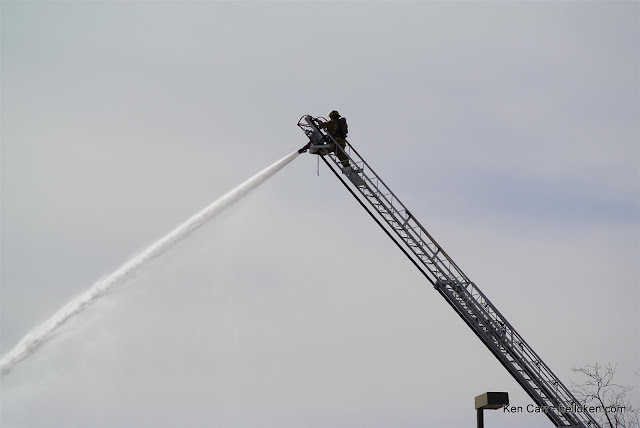 One of the trucks for live on-location shoots at the TV station had a fire a few nights ago.

The external power supply that it plugs into when it is sitting idle at the station shorted out.  Fire trucks had to be called.

Some of the equipment inside was damaged and it smells like burned electrical.  Ewww.

The Ken Carr car gets new brakes and tires

I'm feeling some pain today in my wallet region.

I have been saving for months to get new tires, brakes, and some other work done on my Mazda RX-8.  Yesterday was the day to get the most pressing things fixed.

I purchased four new tires, had brake pads installed on all four wheels and new rotors on the front, and a broken fuel line repaired for a grand total of $2,200.  I still need to get a sticky valve fixed but it's another $700 which means that will have to be done another day.

I had Jim Click Mazda on 22nd Street do the work.  Since they are a Mazda dealership and it's difficult finding repair shops that have a clue how to work on a rotary engine, I just take it there even though it is likely it costs more.

One surprise benefit: My wallet is much thinner so it doesn't put as much pressure on my right butt cheek.

An air conditioning company is installing new equipment on the roof of the TV/radio building this week.

One of the employees that works for them had a little bit of trouble navigating his company truck.  He backed into one of the satellite dishes behind the building.

If your TV signal is a little bit wavy, here's the reason why.

One of my neighbors from a few buildings over at Ridgepointe is apparently bored.

I spotted a bunch of writing on one of their windows.  I couldn't make it all out, but "Love Yourself" was easy to see.

Due to this suggestion, I now love myself.  Thanks random odd message in a neighbor's window!

Sundays are a day when Anthony and I get a little shopping and eating done.  It's the one day of the week we both have off together.

The first stop was Target.  I bought Lucky a couple of dog toys and Anthony needed cleaning products.  Then, we had dinner at Boston Market, and we ended our Sunday adventure at Walmart Neighborhood Market on 22nd Street with our usual weekly grocery shopping trip.


Panties on a pole - The sequel

I posted a photo in September 2012 of a random pair of girl's panties on the top of a pole next to a garbage dumpster at Ridgepointe where I live.  It was a rainy morning, so the panties were wet.  I thought it was an amusing and odd thing to see.

I came home from work a few days ago and I spotted another garment on top of a pole next to a garbage dumpster at Ridgepointe.  This time, it was a short women's robe.

The apartments at this complex have plenty of closet space so clothes shouldn't be stored on poles in the parking lot.  Why this happened will likely remain a mystery.  But, if someone needs clothes the first place they should look are on the poles next to garbage dumpsters at Ridgepointe Apartments.

I had the privilege of meeting legendary actor Henry Darrow today.  He was a guest on the Morning Blend.

His acting resume includes the NBC TV series The High Chaparral as Manolito Montoya from 1967-1971, Zorro in the 1990's, the movie The Hitcher in 1986, and even Star Trek Next Generation.

He was a very interesting guest on the show and he was kind enough to stand next to me for a photo.

St. Patrick's Day fell on a Sunday this year.  I celebrated by having one of the least interesting weekends on record.

I was sick with a bizarre pressure style headache on Saturday.  I slept a bunch all day and shoveled aspirin and sinus medication into my pie hole but it didn't have much effect.  Fortunately, it didn't hang around and I felt okay today when I woke up.

St. Patrick's Day itself (today) was very uneventful.  I watched Anthony eat 31 Peeps for breakfast, then rush out the door in the afternoon to go drinking with some co-workers.  I stayed home, walked Lucky, did laundry, then went out solo to Jack In The Box for dinner, and Walmart Neighborhood Market for groceries.  Dinner and groceries was the first time I went anywhere besides the apartment complex all weekend.

The good news (in my mind) is that avoiding drinking green beer this weekend means I won't have to look at green poop, which is always the result of consuming anything with green dye.

This weekend I was down with the brown.

This week's visit to the Walmart Neighborhood Market at 22nd and Craycroft: