At jury duty in downtown Tucson. The room I'm sitting in is a sauna. Sad face.

One of the most fun and random parts of Twitter that I've enjoyed is not only interacting with people and sharing info about random things but also the occasional celebrity encounter.

I'm followed by Mary Ellen Rasjkub (Chloe on the Fox TV show "24", she follows a small group of people so that makes that extra cool), have swapped Tweets with Shaquille O'Neal, and today there was a new celebrity Twitter encounter:  Right Said Fred!

I mentioned them in a Tweet I posted earlier today and they apparently found it in a search and replied to it (even though I didn't @ reply them because it was for someone else).

I've played "I'm Too Sexy" at various radio stations for nearly 20 years.  It was a fun moment!

Smoke and dust over Tucson

This evening we had a combination of smoke and dust due to winds.  The smoke was from a new wildfire burning near Sells, Arizona (the Boboquivari Fire).  The combination made for some awful air quality but some spectacular and unusual photos.

There are many restaurants I have not eaten at in Tucson during my ten years here.  One of them I haven't eaten at multiple times is Buddy's Grill.

The food was good and they were open later than some sit down restaurants and it was in a great location in northeast midtown.

I learned this afternoon thanks to Twitter (I learn a lot thanks to Twitter) that its closing after being at Grant and Swan for a number of years.  They apparently have a second location at Valencia and Houghton that is doing well and will remain open.

Here's the note posted on the Buddy's Grill Facebook page detailing the closure:

"A HUGE THANK YOU to all of the folks that have joined us on Grant and Swan over the last 21 years. Unfortunately we will be closing our doors tonight for the last time. We are part of the microcosm of what's happening all over the United States with small business and the economy. We are family owned and operated and consider Buddy's our home and welcomed you all in as guests not customers because to us, that is what you have always been. Thank you for an amazing run at our Grant and Swan location.

THE SILVER LINING... we have found a home on the east side of Tucson on Houghton and Valencia for the last 3 years and that location will remain open and is flourishing. Please consider making the drive out for your favorites. You will see familiar faces and of course the Owens family there to welcome you in with open arms!
Again, we can't thank you all enough for your loyalty all these years. You could've gone anywhere and your chose our place. We are forever grateful. God bless you all! The Buddy's Grill family."

RIP Grant and Swan Buddy's Grill.  You will be missed!

I was on the Morning Blend on KGUN 9 TV today!

Topics included my hair and chicKEN choking. (See the previous post with the San Diego ChicKEN).

One of the unique part of my job is meeting random famous people (and characters).

Check out my Celebrity Photo Page at the top of this blog if you want to see a collection of the famous I've met.

Yesterday I added one more:  The Famous San Diego Chicken who is in town for a Tucson Padres baseball game.


A bobcat in the conference room

Usually the most ferocious thing in the radio station conference room is my co-workers!

We had a visit today from a bobcat.  It was on a leash but nonetheless it was the first time in my 24 year media career I've been in a conference room with a bobcat.

I won at Cosmic Bingo!

I like to go play Cosmic Bingo.  I won a bingo one time and so did four other people so I got 20 dollars for my win.  After playing for nearly three years that was exciting.

I won on Saturday night!  The 100 dollar prize for the game!

Here I am... a proud Cosmic Bingo winner at Casino Del Sol! 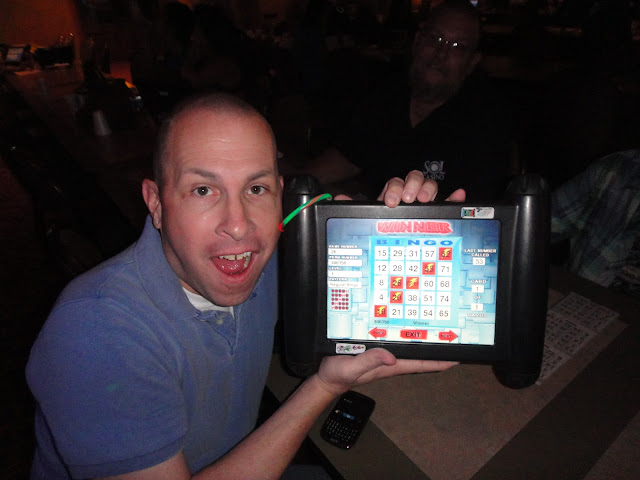 I wondered why I didn't sleep well last night. The top sheet on the bed came untucked. Ruined the bed's delicate balance!

Death of a high school friend

I went to high school in Kearney, Nebraska at Kearney High School.

I didn't have a lot of friends from my own class.  Most of them were from the class one year younger.

One friend (I use the term friend loosely here) I had who I was in Cub Scouts in Junior High with and we hung out at each other's houses a couple of times and I had a few classes with was Jeff Harris.  We were in the same graduating class (1984) at Kearney High.  I don't remember him that well (It was the early 1980's, it was a looooong time ago!) but he was a decent kid from my recollection.

I was reminded of him today when one of my Facebook friends, who was in the same graduating class as I was in 1984, posted "RIP Jeff Harris" on her page today.

His last name is different now (Smith) for some unknown reason.  He passed away on May 29 at a hospital in Omaha.

His birthdate was one day before mine, same year.  He lived in a rural area of Nebraska according to his obituary which I looked up in the local paper (kearneyhub.com) online.

It occured to me today that I will end up finding out about more people I went to high school with who pass away.  Its a part of getting older I suppose.

I don't have particularly fond memories of my high school experience.  I was a very average student who was a little too creative for his own good.  Which explains why my current career suits me so well.

Finding out about Jeff's death today made me pause for a moment.  I hope he lived a good and happy life.

Did you know there is salad dressing named after me?

Feel free to put my Chunky Blue Cheese on your salad.  (That sounds as naughty as I thought it would). 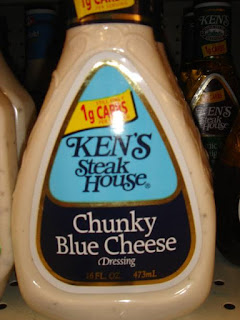 My friend Andres and I went to the Arizona Diamondbacks game on September 10, 2007.

A couple of photos from the game: