Eating tortilla chips with a fork

There's nothing wrong with that.  But there are moments watching him eat where I see foods eaten with a utensil I've never seen consumed that way.

We ate lunch at El Taco Tote on Wilmot on Monday.  He asked me to get him some tortilla chips while he got salsa from the salsa bar.

Then, before digging into his enchiladas he ate his chips.  With a fork.

The first step was picking up a chip.  Sometimes it took numerous tries.  Then, while carefully balancing the chip on the fork he dunked it into some salsa and into his mouth it would go.

He was remarkably good at it.  Very little spilling.

Here's how its done:

I had forgotten (until today) that I had taken these pictures with my Blackberry of shopping with Anthony before Christmas.

We spent a couple of hours at Park Place Mall in Tucson. These photos were at H&M and Macy's. Clothes and a new vacuum cleaner.

Merry Christmas to us! 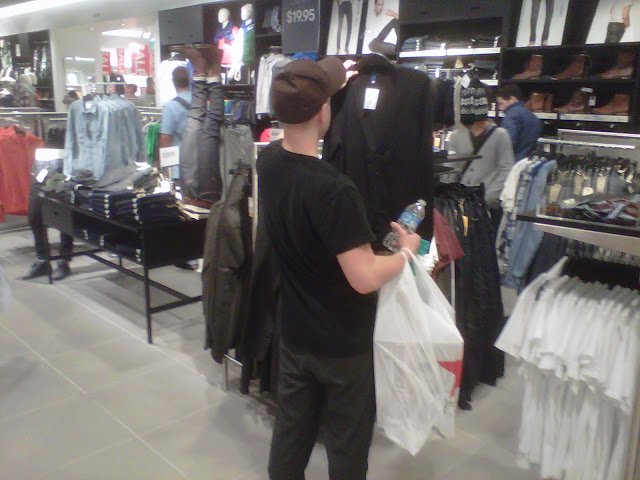 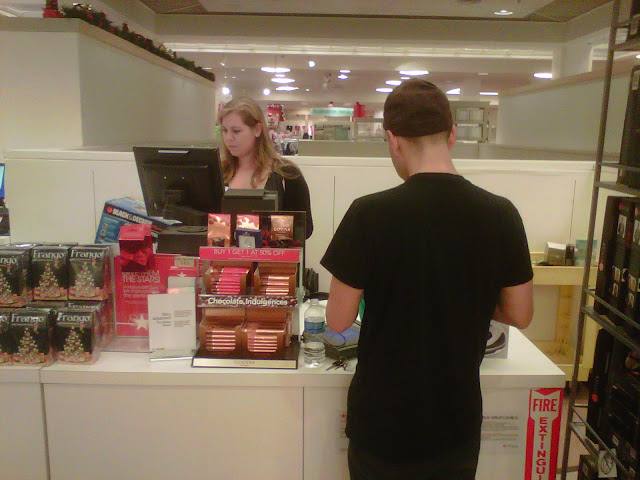 I thought this was fun.

I've gone to the ATM many times in my life but have never pulled in behind a police officer getting cash. 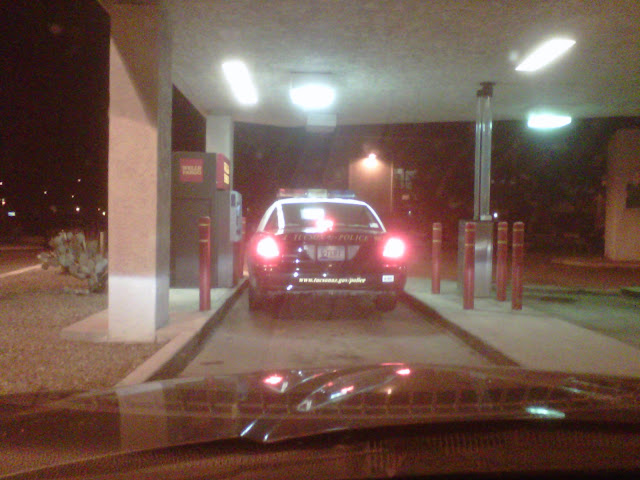 It seems no matter where I work... I end up working on holidays.

I'm not mad.  It comes with the territory.  People expect to see something on their screens when they turn on their televisions.  Somebody has to produce it.  That somebody... is me!

It was a bit lonely in the parking lot today though...

Anthony drove me today - its a Christmas Miracle!

It is such a rare occurance (we've known each other since May 2009, its the third time he's ever driven while I'm in the passenger seat) I had to capture the moment the best way I know how:  Kenparazzi style.

I didn't realize until I downloaded the photo from my camera that it looks like he's an unsafe driver... drinking water in traffic with no hands on the wheel.  To his credit, its not as dangerous as it looks.  We were stopped at the traffic light at Speedway and Wilmot.

And now, the moment captured...

I have the day off today.  Its a cold, rainy, yucky day in Tucson.

Rain is kind of an unusual event in Tucson.  The desert is relatively dry.

I did take a few photos today from my apartment balcony to show how much rain we received.

I took some photos of today's winter rain.

Don't try this at home (I didn't, I took these while I was driving).

Backing dat ass (or car) up is dangerous

I've been producing the news for a couple of months now.  All kind of stories air but one stuck out to me in the last few days.

A woman was killed walking across the lot of the Chevron station at Valencia Road and Midvale Park in Tucson.  The manner in which she was killed was what was caught my eye.

She was run over by a tow truck that was backing up.  She died from her injuries when she was struck.

The story stuck out to me because it reminded me of a class I took a couple of years ago.  I had looked into whether being a cab driver would make a good second job for me.  I spent a couple of days checking into it including taking a class at the cab company.

I learned that driving a cab isn't the best job for me.  A big shout out to anyone who does drive a cab because you're tougher than I am and you're awesome.  I got uneasy about the most remote possibility that someone could try to rob me and that ended that.

I did learn from the class I attended about how to safely drive a cab / vehicle.  There were lessons that included how far to drive behind someone, the importance of driving at safe speeds and paying close attention to your surroundings and what other people do at intersections.  I also learned the least safe driving maneuver there is:  backing up.

The class instruction suggested backing up slowly, carefully, and as infrequently as possible is the best bet.  The reason is you have the least amount of visibility regardless of what you drive when you go in reverse.

I took that to heart even though I didn't end up working for the cab company.  I am super careful when putting a car in reverse.  Then a news story popped up that solidified what I was taught.

The tow truck driver wasn't cited, alcohol wasn't a factor, in all likelihood he just didn't see her and probably backed up too fast.  (I don't know that for a fact.... its just a guess on my part.)

When you're behind vehicles or if you're going to back one up:  Be careful.  Backing dat ass, or dat car up... can be more dangerous than it seems.

The worst job interview I ever had

I'm embarking on another round of job interviews in search of my next job (see previous posts about why I won't be at Fox 11 after January 31, 2012).

I thought I'd share the worst job interview experience I've ever had.

Flashback to 1996:  I had just returned to California from working in Salt Lake City.  The station there had been sold and I was looking for a new career challenge.

I got a lead that an alternative rock station in Sacramento was looking for a new Program Director.  The station had a strong signal and was owned by a local guy.  It seemed like a job I could succeed at so I decided to go for it.

I spent three days putting together a presentation.  I was sure I was going to be competitive for the job so it was worth the investment in my time and effort.

I drove 50 miles from Stockton to downtown Sacramento.  The radio station occupied the penthouse suite of the Renaissance Tower, an ominous looking black skyscraper.  I was excited.  This could be amazing.

I arrived in the lobby and waited almost 25 minutes before the owner came out.

I had a little background on the guy.  Apparently he had a law degree, liked to fix broken equipment in the station himself, drove a purple Corvette, and had been described to me as a bit quirky.  I work in the media business and had encountered plenty of quirky so I didn't think a whole lot about it.

The man I was there to see was a tall skinny man in a cheap suit.  He also had an odd voice.

I got a tour of the station before we ended up in his office.  It was impressive.  There was a remarkable view of not only downtown but a lot of the Sacramento metro area.

The interview started... and the weird started.  He'd ask me a question, I'd answer it, and then he'd proceed to pick apart my answer.  It was quickly obvious he hated everything about my presentation.  I told him how I thought his station stood in comparison to his competition.  He told me that I was dead wrong.  He listened to the audio presentation I brought and told me it was too long.  I suggested ways he could increase revenue and ratings.  He told me that I didn't understand the Sacramento market.

I was in his office for three hours.  He interupted the interview multiple times to take phone calls.  The most memorable was the conversation he had with someone who apparently was a sexual partner he had lined up for later that night.  He asked her on the phone if she had a friend so they could make it a threesome and then requested that she describe in detail how big her friend's breasts were and who would do what.  I felt uncomfortable.  After he hung up from that call he said, "Sorry about that, I have a meeting tonight that I had to set up."

I'm not a prude by any means but it seemed gross that I made the time to prepare, drive an hour to get there, spend an afternoon with this guy, and ended up fighting back the urge to throw up in my mouth picturing him and some hideous woman (or women I suppose) in a hot tub exchanging diseases.

After three hours of being mowed down by this guy I got onto the elevator to make the long trip down to the parking garage and I thought to myself: "I don't care how much money this man would offer, I would never ever work there."

I never heard from him or that station.  I ended up working for a competing station in Sacramento instead.

Its amused me in the years since because he ended up selling the station to Entercom for $25 million dollars.  Then he proceeded to sue that company in an attempt to get his station back and having the sale nullified after he had seller's remorse.  It went on for years in court.  He lost every lawsuit.  He no longer owns that property and now has stations in Palm Springs and Las Vegas.

The lesson I learned:  If I'm in an interview and the person interviewing stops to take a phone call to ask how big the caller's boobs are, it may not be the job for me.
Newer Posts Older Posts Home
Subscribe to: Posts (Atom)