I went to the Pima County Fair on April 17 and did a live KENcast for Mega 106.3, got a foot massage, ate a corn dog (almost in one bite!), and saw Boyz II Men.

I met Boyz II Men at the Pima County Fair in Tucson! 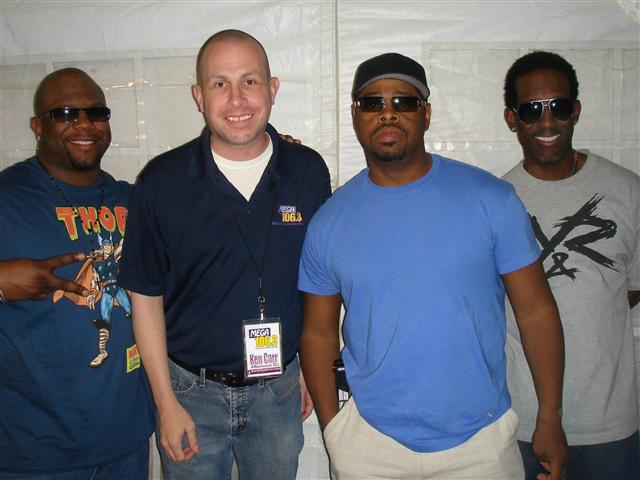 I've rented a lot of places in my life.  So far, Ridgepointe Apartments, managed by HSL Properties, ranks as one of the most challenging.

I used to think the house I rented on North Stone Avenue near Amphi High School was the most challenging.  But, it was 60+ years old and the rent was less than $500 a month so I didn't have high expectations.  I liked the place, it was truly unique, and even when the last owner of the property wouldn't fix the leaking roof I wasn't mad.  I moved out because it poured inside every monsoon rain and developed black mold.  That property was condemned a handful of months later by the city of Tucson and was torn down shortly afterward.

Before I continue, I want to mention that I realize that if a property is rented it won't be perfect.  Renting is like buying a used car.  The problems that existed previously may be painted or spackled over.  It doesn't actually belong to me so whatever is being rented is subject to whatever standards the person or entity that owns it uses.  If I don't like what's offered I am under no obligation to rent it.  I'm realistic about it.  However, I do think renting a property to someone does obligate the owner to provide an appropriate environment to live or use the property.  Its required by law.

I won't be all negative about Ridgepointe because there are good things about living here.  Its a great location for both Anthony and I, the grounds are nicely landscaped, the place looks nice on the outside and for the most part on the inside.  The floorplans are unique and cool.  The complex is quiet and the crime level seems very low.  It has a built in washer dryer as well.

The problems we've had have been odd ones.  The first thing was that when we toured the place they had a special for a free month's rent with a 12 month lease.  We decided we wanted it, came back four days later to submit an application, and when we signed it we were informed the special had changed to half a month.  After speaking to a Vice President of HSL at the corporate office (thanks to some help from KGUN 9 On Your Side) he explained that their specials change rapidly.  Okay, that was my bad.  They have a right to make their specials whatever they want.  I didn't put money on the apartment when we toured the place.  It screwed up my budget but I dealt with it and moved on.

A few aesthetics about the apartment were minor annoyances.  The stove control panel is quite scratched and although it works fine its sometimes difficult to figure out what temperature a burner is turned to.  Someone used a wire brush on the thing at some point.  Not a major issue, just annoying.  The other appliance issue is the refrigerator which sounds like a diesel engine half the time when its running.  I thought it was unbalanced so I've tried moving it a little and adjusting the feet on it.  It still does it.  My experience as a renter pretty much has shown there is no landlord or property manager that will do anything about something like this unless it stops working altogether.  Also, in between its cycles on and off it leaks pretty warm air into the freezer so stuff starts melting then freezes again when it comes back on.  One of the uglies about renting.

I was dealing with that and not upset.  Then, the leaks started.

A few days after Anthony and I moved in there was a nice steady winter rain and we had a leak that started in the master bedroom closet.  It dripped all night and after locating a bucket for the water to drip in we got through the night with the annoying noise of a pretty steady and rapid drip.  I went to the office the next day, asked for them to fix it, and they wrote up a maintenance order.  Someone from maintenance came, looked at it, and said they'd address it.  I thought maybe they had fixed it while we weren't home.

A couple weeks later we had another rain.  It dripped in the closet again and also a leak in the pantry appeared.  Less dripping in the closet, more volume in the pantry.  A bucket and a pitcher were located.  Another trip to the office to request a fix.  Another promise to fix it.  Someone from maintenance came.  I again, being the optimist that I am, thought they had probably fixed it (or attempted to) while we weren't home.

In the meantime, we bought a nice new vaccuum cleaner in February.  Anthony went to use it, it was picking up some sort of white coarse dust from the carpet and the filter inside quickly got clogged, and he had an asthmatic reaction.  He ended up being horribly sick, time off work, and doctor visit.  The vaccuum still picks up that odd dust every time I vaccuum although Anthony isn't allowed to vaccuum anymore so he doesn't get sick from whatever is in the carpet.  The vaccuum still gets quickly clogged every time I use it.

March brought more rain, and more leaking.  The pantry ceiling dripped again and a new leak in the ceiling in the dining room with a wonderful dinner plate sized brown spot.  Another trip to the office to request a repair.  I took photos this time and showed them at the office on my digital camera.  They asked me to send over the photos via e-mail so they could be reviewed by the property manager.  This time we were visited by a new maintenance guy who said they restructed the maintenance crew since this stuff wasn't getting taken care of, a roofing guy who climbed on a ladder from our front balcony to inspect the roof, and the manager and someone from HSL's corporate office who came inside to compare my photos with the actual damage.  I was sure this was going to get taken care of after all of this.

A storm came through over the weekend that brought a nice steady rain.  Saturday midday I slept in, got up to go into the kitchen to start the dishwasher, and heard a thump thump thump.  I opened the pantry door and water was dripping onto the carpet.  I grabbed a pitcher, put it under the dripping water, and started looking for other possible leaking locations.  Surprise surprise, a new spot in the dining room ceiling was wet near the big brown spot that still hadn't been fixed from before.  By the end of the evening the ceiling in the master bedroom closet had joined the party.  Another visit to the office to request a repair.  (Total of 2 inches of water in the pitcher was collected by the way... a delicious brown color too.)

Someone from maintenance showed up Sunday afternoon.  He informed us that they hadn't actually done a repair from the last time and he was bringing some kind of supervisor on Monday to go on the roof and put sealant up there to at least stop the leaks in the pantry and dining room.  He also said the master bedroom closet drip is common in this complex because it's under the roof tile and that would require taking tile off to fix it.  He said they end up fix the inside of those closets often in apartments when tenants move (I assume to make it look right aesthetically) and then repeat the process.  He indicated that they'd look at that part of the roof but it was unlikely they'd make any real attempt to fix that leak because "that requires taking tile off the roof and we just don't do that".

I found this interesting quote from the HSL Properties website (HSL Properties): "HSL Properties was originated with the concept of creating value for its investors by providing excellent service to its residents while controlling operating costs."  If by controlling operating costs they mean don't spend the appropriate funds for maintenance (or roof leaks) then they've fulfilled their mission.  Roof and ceiling mold can be covered with paint so that keeps the money train rollin'!

We're spending about $10,000 in rent to live here for a year.  Is it too much to ask for that kind of money to not have a constantly leaking roof?

I just did a Google search and was disappointed.  I thought maybe I was an unusual case for HSL.  If what I read online is any indication it seems I'm just like everyone else.

I am going to ask for some sort of rent concession as an apology for essentially ignoring the issue.  Considering how hard they try to "provide excellent service to its residents while controlling operating costs" I'm not optimistic but if they do then they'll get the credit for making it right that they deserve.

Finally... I won at Cosmic Bingo!

Here's the definition of futility:  Going to Cosmic Bingo at Casino Del Sol 75% of Saturdays and never winning any cash.

I have fun when I go, and I live in an eternal world of optimism:  I think that at some point, in any endeavor I engage in, I'll have a moment of triumph.  Some things just take longer than others.

That thought process has worked in my career and personal relationships I also think it works for other things.  In this case, bingo.

I had to share the $100 cash prize with four other people in the room but I finally won.  It was like losing my virginity.  I keep telling myself that anyway.

I collected my $20 cash prize and had a total moment of euphoria.

My photo of the machine when I won: 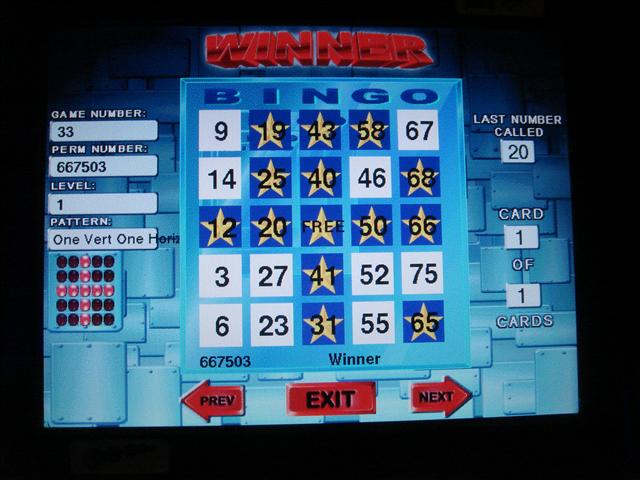 The Arizona Lottery sent me socks!

I am a heavy user of Twitter. http://twitter.com/kencarr (or @kencarr if you're on Twitter already).
I Tweeted a week ago "Bought @azlottery Mega Millions tickets. If I win, I'm buying new socks. The reeeal fluffy kind."

Today in the mail I got a box from the Arizona Lottery. They had seen my Tweet and sent me a few scratchers, a Powerball ticket for this Saturday's drawing, and.... SOCKS!
Awesome!! 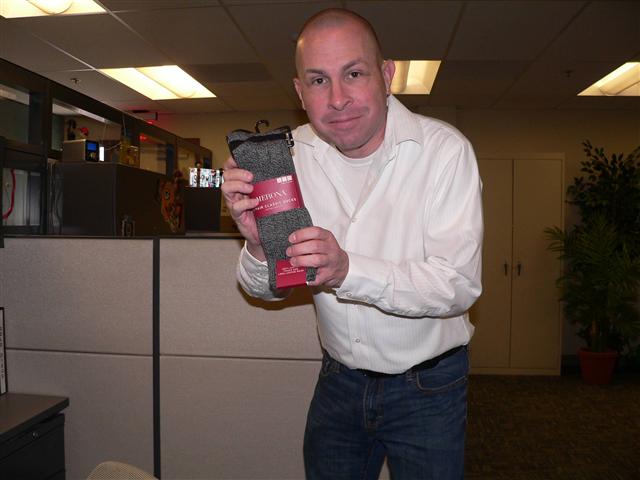