I got a prescription from Dr. Merchant (my dentist) on Saturday for the sore throat. She prescribed me penicillin.

It worked! My teeth are still a little sore at times but the sore throat went away.

I'm getting the teeth out Monday at 10 a.m. I'm really nervous. I am hopeful once I get through the actual removal and recovery that I'll feel better. I have a feeling that the teeth have been cause me trouble for a while in other ways besides my mouth. I'll only know once they're out.

The left bottom wisdom tooth in my mouth continues to cause me frustration and anguish.

I woke up this morning and now I also have sore throat. I am going to live on aspirin and ibuprofen until the teeth come out August 3.

I have put off getting my wisdom teeth out since March.

I don't like anything medical. I am scared to be honest. And, we had budget cuts in April that awarded a bunch of people two extra weeks of vacation to make up for the financial cuts. It's made finding time to take off where someone else hasn't already claimed it relatively difficult.

My bottom left wisdom tooth decided to start hurting around the clock on Sunday morning. I've been trying combinations of aspirin and ibuprofen with Orajel. I can successfully reduce the pain but can't seem to eliminate it.

I have three days set to take off (August 3,4, & 5) and an appointment set at the oral surgeon (Dr. Stephen Denbrock) at the Foothills Oral & Maxillofacial Surgery Monday August 3 at 10 a.m. (What in the heck is Maxillofacial? I'll have to Google that later).

I hope I can manage through the discomfort until then. I did call today and ask if I bought one of those over the counter temporary fillings at the pharmacy if that would hurt anything. The woman who answered the phone seemed skeptical that it would help at all but said it wouldn't impede their procedure so I may just try it. If I do, I'll let you know if it works.

Just another summer day in Tucson 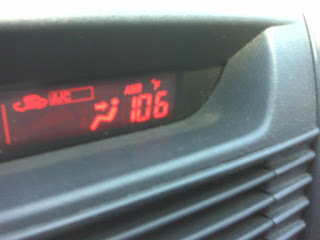 This was what the Ken Carr car said the outside temperature was. In the shade in Tucson! Mid July heat!

Janet from Three's Company got a DUI

Joyce DeWitt, the actress who played Janet on Three's Company, was arrested on suspicion of DUI in El Segundo, California.

The greatest invention ever made for shaving hair from neck to the floor: The Norelco Bodygroom. It is amazing.

I won't get graphic but it works great for areas that are difficult to access.