I always look for things that have Lucky's name on them.  Yesterday at the store I spotted Lucky Duck wine.

I'd let Lucky try it... but I picture him as an annoying drunk.

The two biggest reasons I go to Walmart Neighborhood Market

Ignore the can of vegetables in the cart.  I still don't know how that got in there.

Hair in a sandwich at Wendy's

Anthony and I had dinner last night at Wendy's at Grant and Alvernon in Tucson.

He has an almost magical way of finding a hair in his food.  We can't eat at Burger King anymore after he found a hair in his french fries.  Yesterday's hair was in his Asiago chicken sandwich.

We can't eat at Wendy's anymore either.

It's a good thing there are plenty of other fast food restaurants or I'd starve.

My neighbor wants to burn the apartments down

One of the things about living at Ridgepointe that worries me:  fire.

There are a number of neighbors who have barbecue grills on their balconies.  This is the first complex that doesn't penalize residents for having them (and more scary, using them).  I know somebody's going to catch a building on fire one of these days.  At least I will be ready with a video camera when a dozen fire trucks show up.  It had better be a big fire when it happens so I can make some cash when my video of the incident goes viral.

Last night, a neighbor in the building to the south lit several tiki torches on his balcony.  I took a picture.

Coffee table on a roof

One thing about living in an apartment complex that makes it interesting:  Neighbors.

I came home from work yesterday evening and the car in the space next to me had a coffee table turned upside down on its roof.  I hope they remembered it was there when they left because it wasn't strapped down.

Another monsoon storm rolled through Tucson on August 22.  (I'm just getting around to uploading photos from the last few days).

This one had some heavy rain.  I captured the shower through the window next to the back door of the KGUN building.

We've had quite a monsoon season.  It has not been good for my hair.

Car crash into Circle K at Speedway and Kolb

I caught a news story about a car that crashed into the Circle K convenience store on the east side.  It was the location on Speedway just west of Kolb.

I went there the next day and the damaged area was boarded up.  Apparently the Lexus that went into the store managed to hop the curb and land in the area right behind where the cash registers are inside.

A photo of the aftermath from outside:

I took Lucky out for a walk tonight.

Usually the most unpredictable thing he does is pick a random spot to poop.  When we first got him, he pretty much stuck to a ten square foot patch of grass.  Now he likes to mix it up.  I'm not upset, he's acting a bit more like a dog.

I've discovered that he gets nervous around brightly colored objects.  We had a moment a couple of months ago where he tried to run from some balloons tied to a post in the apartment complex.  Once the balloons went away he was fine.  The reason I've come to the conclusion about most brightly colored objects was a moment tonight that surprised me.

We were walking along the sidewalk on the east side of the complex after dark and he stopped and stared straight ahead.  He usually does that if he spots a person or another dog and evaluates the situation.  The evaluation either results in wanting to encounter whomever or whatever it is, or start backing up or zig zagging away.

There was nothing I could see that could have caused him to stop.  There was no one or no animal ahead.  But, there were a few bright orange warning cones that said "Cox" on them that were placed over a pile of dirt.  Someone from the cable company had been digging.

I had to coax him along to continue the route along the sidewalk.  He moved up against me when we went by them and then tried to run.  I had a good grip on the leash so that stopped him.  I made him stay for a minute to try and help him realize they weren't harmful.  But, its a challenge sometimes to convince him that the things he's scared of aren't as bad as he thinks they are.

It's pretty clear that he had a bad experience with some sort of brightly colored objects before he came to live with us.  The good news for Lucky is that I don't dress like Richard Simmons so he feels relatively safe around me.

An old audio board, which had been sitting gathering dust for well over a year, was moved today.

I walked past the area where four of my co-workers were working on loading it onto a dolly.  I find this kind of thing makes for a good photo opportunity.  It shows the ability of manly men in a quest to move something large and awkward.

A fallen tree branch caused some damage at my apartment complex.

We're having another rough and tumble monsoon storm season.  A few days ago, an area of the covered parking succumbed to the weight of a branch.

The Kenparazzi caught the aftermath, which is being protected by yellow caution tape.  That always keeps people away.

Fortunately, it was not where I park.

The Humane Society lost their e

One of my co-workers, who shall remain nameless (since I don't want to make anyone feel bad), made a mistake when writing the lineup on the white board for the TV show.

Its supposed to be "Humane Society".  It only takes losing an 'e' to make pets into humans.

A fake vacation at the Tucson Airport

I made a trip this week to the Tucson Airport.  I had to pick someone up that flew in for work.

I rarely take a vacation.  Going to the airport is an unusual event for me.  I really can't afford to travel.

I had to wait since the plane was delayed.  So, I made the most of the time by having a pretend vacation.  At least it seemed like it since I was at the airport.  I took photos!

I spent an afternoon at the MDA (Muscular Dystrophy Association) headquarters in the Tucson foothills last week for a video shoot.  The shoot was for the upcoming MDA telethon.

This was the first time I had visited the MDA headquarters.  Its a beautiful facility.

I helped with the shoot, which was for check presentations, and some testimonials by kids.

I'm not an on-camera talent anymore.  When I worked in radio, I was a local host of the telethon four times in six years.  Now that I've moved into the producing side of television, I still get to pitch in for a worthy cause... just in a different way.

We have another shoot tomorrow (8/18) at the KGUN studios for pieces of the local portion of the telethon.  MDA always arranges for some food.  That will make working on a Saturday a bit nicer.

A street construction project temporarily closed the west entrance to my apartment complex.

I had to use the east entrance.  I've only used that entrance one time in the year and eight months I've lived here.

I hope I don't have to do that again. 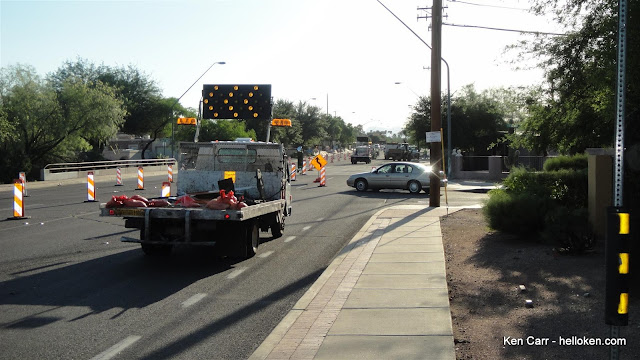 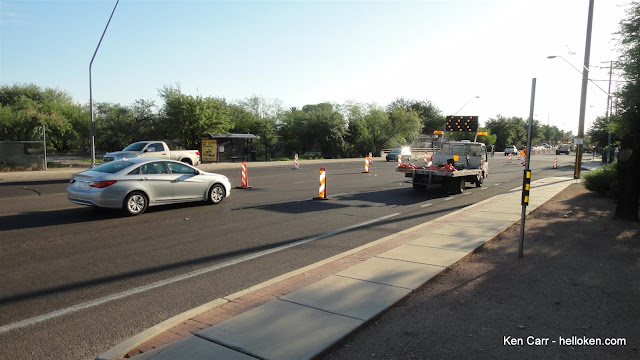 I found a cooked and abandoned pot pie sitting on the counter in the kitchen at work and took a picture.

I was alerted to a little accident scene outside of work this morning.

A woman fell on a sidewalk out near the street and broke her ankle.  Or at least sprained it.

I've posted a couple of photos below that I was able to shoot from inside of our lobby.  You can see in the top photo that she was wearing a pair of stilettos with some high heels.  Those kind of shoes are dangerous if you're not graceful.  And, I'm guessing since she bit it... she isn't graceful.  She might want to consider switching to flats.

The paramedics came to save her.  I would suspect that she was more damaged by lying on the 100+ degree pavement for 20 minutes than she was by her ankle issue.

I live for this kind of thing.

Yesterday's monsoon storms were unexpected (there was only a 30% chance in the forecast), produced a TON of lightning and thunder, and a pretty heavy downpour.  The storms knocked out power for more than 12,000 Tucson Electric Power customers.  Fortunately, we weren't one of them.

I took some photos and I think they came out kind of cool looking.

You be the judge. 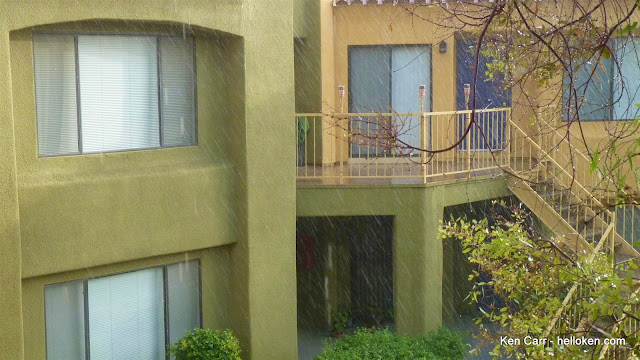 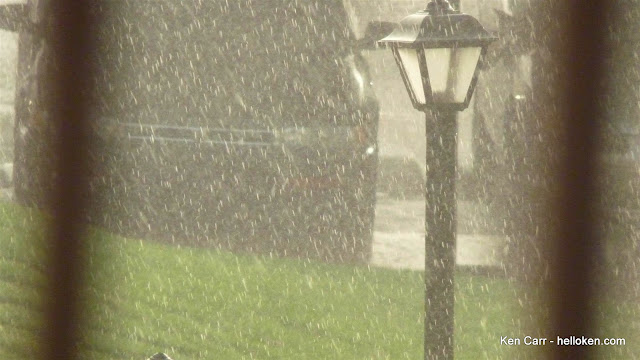 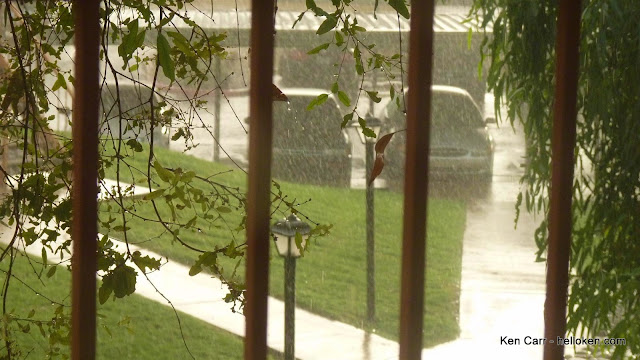 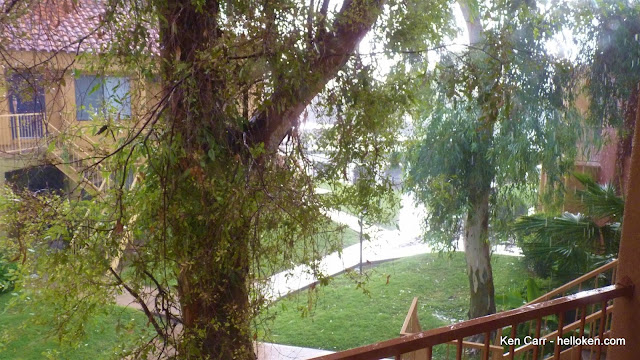 I was a little slow to upload these.  Oops.

We had a very stormy July in Tucson.  Much more active than usual.  July is normally the less active monsoon storm month compared to August.

But, we did get some fun storms.  By fun, I mean lots of wind, rain, lightning and thunder.

A photo of Lucky walking away from me in the apartment.

He doesn't appreciate the Kenparazzi.

If you've read my blog before, you know I take lots of photos.  I'd describe myself as an amateur photographer.  However, a number of photos I take do end up on the TV show so maybe that makes me better than amateur.  The jury is still out.

I have two still photo cameras: a Panasonic Lumix DMC FZ35 DSLR and a Sony DSC-T99 digital pocket camera.  Both shoot 4:3 as well as 16:9 photos.  If you don't know the difference, basically the 4:3 is nearly square and the type of photos that have been around for decades.  They make 4x6 and 8x10 prints (and a variety of other related sizes).  16:9 is the rectangle ratio used on HD TV's and in movies.  Think of it like this:  4:3 is what your standard definition television is, and 16:9 is what your HD television is.  One is more square-ish, the other a rectangle.

Both cameras also shoot HD video at 16:9.  I also have two pocket video cameras (a Kodak Playsport and a Sony Bloggie Duo).

I've decided this week its time to start shooting photos in 16:9.  I think it'll be beneficial for a couple of reasons.  I don't print photos I take, I put them on the internet.  So having the photos in standard photo sizes isn't really important.  The other is that I want to create video regularly for YouTube and if the photo size matches the video size for HD I can use them without wasting editing time in the videos.

I've been developing a content strategy for the videos and being able to use still photos will be an important part in their creation.  And, we're moving into an HD world.

I wanted to share all of that so if you notice that the photos look a little different on this blog its because I made the switch.  And, if I didn't tell you I'd worry that you wouldn't be sleeping well.

Here are two photos that show the difference: (Note: if you click on the photos, you'll really be able to see the difference between the two... because they'll show full screen).