A guy in Tempe, Arizona has a dead tree in his backyard. He asks his friends that have chainsaws to come over and cut it down while he's away. He returns and they left him a gift.
So, he decides to sell it on ebay.  They took the listing down though before he could get it sold.  Apparently ebay has something against selling penis shaped wood.
The "tree" even has its own Twitter.
Officials in Tempe made him cut it down because it was apparently upsetting a few neighbors.
The whole story made me laugh. Of course it wood! Ehhh, would. 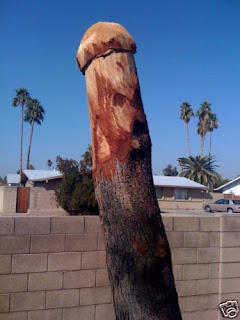