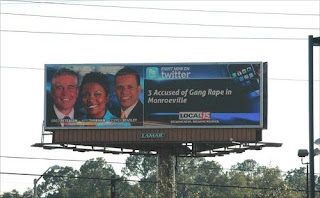 This billboard for WPMI-TV in Mobile, Alabama was meant to promote the station's news team and breaking news. Oops. (General Manager and News Director were suspended for the mess up!) It's an electronic billboard so the Twitter posts rotated as the station updated their Twitter.
Apparently these three were not accused of gang rape. Unless reporting news falls into that category.
Newer Post Older Post Home